Is Biotechnology The Best Path To Food Security? 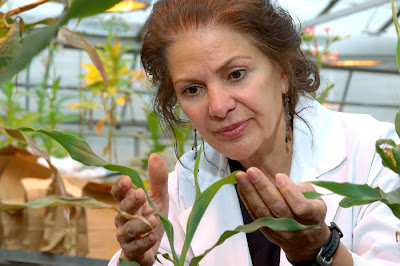 Regarding the poll in the side bar: Even if genetically engineered crops result in higher yields, is biotechnology really the path we want to take to improve food security?

Below is another selection from Paul Robert's book, The End of Food. Here he discusses the mechanism by which gene transfer can result in unwanted, and potentially dangerous, traits:

"Because genes influence cellular behavior in such biochemically complex ways, there are concerns that the effect of engineering a single gene could in fact spread beyond the targeted trait.

One such concern centers on the proteins that transplanted genes create in their new cell hosts.

Proteins are the gene's physical expression; the gene's DNA code "tells" the cell to assemble the protein from various building blocks in the cell. This "expressed" protein then initiates a cascade of molecular events within the cell that result in some trait, such as growth, which engineers hope to influence. The complication here is that this expression-and-cascade process is governed by many factors -- by the protein's DNA structure, to be sure, but also by the sugars, fats, and other chemical compounds that are present in the cell when the protein arrives -- a chemical soup that varies from cell to cell.

Because different kinds of cells contain different chemical compounds, the same protein may produce substantially different results when expressed in different cells. Thus, by transferring a gene from one species to another and by causing proteins normally expressed in a completely different cellular environment, transgenic modification may raise the risk of unanticipated, and potentially unwanted, effects that weren't observed in the donor organism.

The potential for such surprises was underlined in 2005, when researcher Vanessa Prescott and her colleagues found that when a gene from a pinto bean was transplanted to a pea, the pea acquired an allergenic effect that hadn't been present or even expected, in the bean."

But the government tests these plants before they land on our tables, right? The FDA is responsible for the safety of our foods, of course they test them...

"The FDA does not test transgenic foods prior to their release. ... This weakness was highlighted in 1998 when the US government approved a Bt corn variety known as Starlink for sale as animal feed but not as human food. Despite this stipulation, the Starlink Bt toxins turned up in more than three hundred consumer products. The Starlink debacle led to a massive program of mill closures, export bans, and product recalls that cost Starlink's maker, Aventis, an estimated $1 billion."

Indeed, we are. At the very least we need labeling as a sort of opt out.