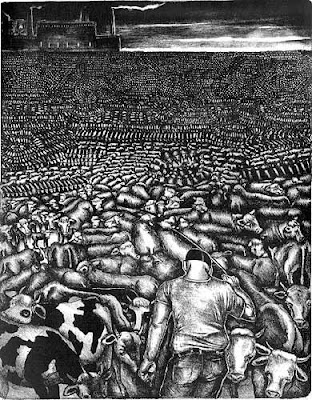 Grist.com just posted a fine article on the growth of industrialized meat production:

The CAFO Syndrome:
An Interview With Mia Macdonald On China's Growing Appetite For US-Style Meat Production

"More than 60 billion farmed animals are alive today, a population that's set to rise to more than 100 billion by 2050 if current trends persist (there's a school of thought that thinks they simply can't, but we're talking about the numbers here).

To have all of those animals raised in a free-range pasture system would require massive amounts of land, not to mention water and climate space.

The earth just doesn't have that much land -- and even if it did, there's a question about whether resources like land, water, and climate should be used to produce ever-greater quantities of meat that won't solve world hunger. Eating vegetarian is going to have to become more common everywhere. Those living and making policies in the industrialized world certainly have an opportunity to set an example."

"Eating vegetarian is going to have to become more common everywhere." If that's true, several countries have a leg up on the US right now.
________
Illustration: "Feed Lot" by Sue Coe.
Posted by Bix at 9:27 AM

While I think we may certainly have to eat more vegetables, if you're worried about land, we will probably eat more grain which gives us the most calories per acre.

As for the meat, we should eat less of it, but there is also some land that is perfect for pasture land. There was some study that showed the most efficient diet includes 1 to 2 eggs per day or a 2 oz of meat per day as some land is not arable. Maybe our diet will be more like meditteranean diet where we eat meat infrequently, but it still makes sense to produce some eggs and meat.

Some good points there, Matt.

You know, I'd like to be alive in the year 2050 to see how this pans out. I was talking to someone who said that the change in meat consumption probably won't happen voluntarily, but will be coerced - via the higher price of meat.

It's a good point about the price of meat going up will make it harder for some people to buy (less consumption).

There are other parts to the equation though. How about expanding which meats we eat. Which meats are considered "food" is largely cultural. I wonder if we will start broadening our definition, over time, as well in order to cope with the greater demand. (Come to think of it you might even want to include "franken food" in this part of the equation).

Now there's something to think about. Rodents? Or something larger ... seal?

CAFOs are a big environmental and health problem. Cattle CAFO's are especially bad. Beef is the most inefficient way to produce calories. If you want to eat meat, chicken and pork are much better.

We get air pollution, noxtious odors, water pollution and green house gasses from CAFOs. The corn fed diet fed to cattle promotes e.coli O157:H7. (Cattle's natural food is grass). Cattle live in there own excrement which spreads the e. coli contamination around. The animals are given antibiotics with their feed to keep them healthy. This promotes antibiotic resistant bateria. The cattle are also given growth hormones which I believe are bad for human health when we ingest them through the meat we eat. CAFE raised beef from cattle (a.k.a meat production units) is not pretty or healthy for us or the planet.

CAFOs do one thing well. They supply a lot of meat at low prices it you don't count the health and environmental externalities.

I think CAFOs exist because most people just don't know are care about how food is manufactured in today's world, corporate profits trump public good and politians turn a blind eye.

Its sad to know that our CAFO systems are being exported China and other developing countries.

Though I'm vegetarian, in the past I have tasted squirrel (tastes like chicken--yeah, I know, they say that about everything) and possum (kind of fatty like pork but not bad taste-wise). I love the Sue Coe illustration, and it's an excellent post raising important questions.

The root of the problem is over-population. As population increases we will be forced to trade quality of life for quantity of life, even if we eat less animal foods.

While I do believe that most people can be healthy with a carefully selected diet that has little or no animal foods, I also believe that Weston Price's conclusion that the healthiest natives ate animal seafoods, organ meats, and/or dairy is correct for optimal nutrition. Also, most vegetarians seem to have missed the boat when it comes to proper preparation of grains and legumes to minimize anti-nutrients and maximize bioavailability of nutrients. Soak, sprout, or ferment needs to be the message for those who rely on these foods as a major food source. Unfortunately, this message has fallen largely on deaf ears, as most consumers buy packaged products that have not been properly prepared for optimal nutrition.