How can I write a food blog and not promote the one day of the year set aside to honor food worldwide - and to respect what impact the lack of it can have. 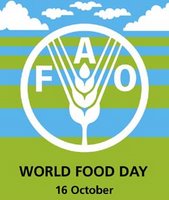 To commemorate the day, President Clinton issued a proclamation in 1993: 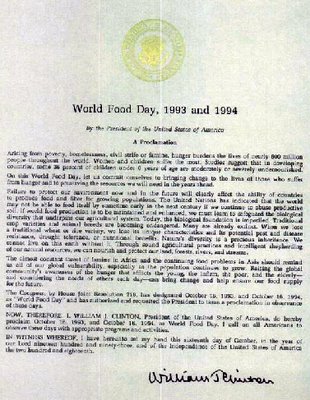 Arising from poverty, homelessness, civil strife or famine, hunger burdens the lives of nearly 800 million people throughout the world. Women and children suffer the most. Studies suggest that in developing countries, some 36 percent of children under 6 years of age are moderately or severely undernourished.

On this World Food Day, let us commit ourselves to bringing change to the lives of those who suffer from hunger and to preserving the resources we will need in the years ahead.

Failure to protect our environment now and in the future will clearly affect the ability of countries to produce food and fiber for growing populations. The United Nations has indicated that the world may not be able to feed itself by sometime early in the next century if we continue to abuse productive soil. If world food production is to be maintained and enhanced, we must learn to safeguard the biological diversity that underpins our agricultural system. Today, the biological foundation is imperiled. Traditional crop varieties and animal breeds are becoming endangered. Many are already extinct. When we lose a traditional wheat or rice variety, we lose its unique characteristics and its potential pest and disease resistance, drought tolerance, or nutritional benefits. Nature's diversity is a precious inheritance. We cannot live on this earth without it. Through sound agricultural practices and intelligent shepherding of our natural resources, we can nourish and protect our land, forests, rivers, and streams.

The almost constant threat of famine in Africa and the continuing food problems in Asia should remind us all of our global vulnerability, especially as the population continues to grow. Raising the global community's awareness of the hunger that afflicts the young, the infirm, the poor, and the elderly -- and considering the needs of others each day -- can bring change and help ensure our food supply for the future.

The Congress, by House Joint Resolution 218, has designated October 16, 1993, and October 16, 1994, as "World Food Day" and has authorized and requested the President to issue a proclamation in observance of these days.

NOW, THEREFORE, I, WILLIAM J. CLINTON, President of the United States of America, do hereby proclaim October 16, 1993, and October 16, 1994, as World Food Day. I call on all Americans to observe these days with appropriate programs and activities.

IN WITNESS WHEREOF, I have hereunto set my hand this sixteenth day of October, in the year of our Lord nineteen hundred and ninety-three, and of the Independence of the United States of America the two hundred and eighteenth.

~~~~~~
If I didn't know better, I'd say that third paragraph was strongly influenced by President Clinton's then Vice President and author of the recent book/documentary, An Inconvenient Truth

"... genetic erosion and the loss of biological diversity is the greatest single strategic threat facing mankind."
- Earth in the Balance, 1993, Al Gore

The FAO has a superb animated map of hunger in the world from 1970 to 2003. (Wow, is North Korea red. I wonder how the new sanctions against them will affect the population's already severely undernourished situation. Can it get any redder?)

I liked that Clinton "call[ed] on all Americans to observe these days with appropriate programs and activities." I haven't heard anything today from our current president. Please let me know if you do!

Update, Oct 17: No word yet on a Bush statement. But, shiver me timbers, the Pope weighed in:

"... local communities also need to be involved in choices and decisions concerning land use, since farmland is being diverted increasingly to other purposes, often with damaging effects on the environment.”
- Pope Benedict XVI, in a message to the FAO, Re: World Food Day 2006's theme, Investment in Agriculture.

Funny, I don't see Pope Benedict XVI and Al Gore sharing the same holy bench, but they sure share the same providence.
Posted by Bix at 12:31 PM