DuPont Fails to Give EPA the Slip 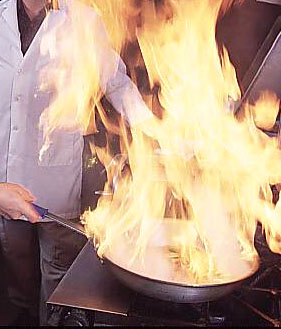 I accept most arguments people give in defense of my being described as fanatical. But just because I can be a little enthusiastic about the daily eats doesn't mean I'm going to throw away my non-stick pans, even if the Environmental Protection Agency (EPA) did just settle:

A $16.5 million handover to the government is a powerful statement. It seems to have affected a few high-profile writers, namely Nora Ephron1 and New York Times food columnist Marian Burros2, both of whom in recent articles (See footnotes) have sworn to banish their Teflon-coated cookware for fear of personal negative health effects.

Curiously, the penalty imposed by the government did not address any consumer risk in cooking with Teflon-coated pans. It was levied against Dupont for failing to disclose information about risk of injury to the environment, and subsequently to humans, from a potentially carcinogenic chemical it uses to manufacture Teflon: Perfluorooctanoic Acid (PFOA).3

Ms. Ephron notes that "PFOA is the bad guy here", with which I agree, but she seems to think it resides within the slippery surface of her frying pans and could thus be the cause of her early demise. I'm not sure how she arrived at that:

"It is noteworthy that PFOA is not part of the finished product of nonstick cookware or bakeware. It is only used during the manufacture of the product and only a trace amount of PFOA remains after the curing process. There should be no measurable amount of PFOA on a finished pan, provided that it has been properly cured."
- Wikipedia: Teflon

Even the EPA trumpets this:

"EPA wants to emphasize that it does not have any indication that the public is being exposed to PFOA through the use of Teflon®-coated or other trademarked nonstick cookware."

This doesn't let non-stick cookware of the hook though. It's true that harmful gases are released when the pans are heated, dry, to high temperatures. But that's true for cooking oils/fats too, which I've discussed here. Wikipedia's entry makes reference to a study that found heated butter was more detrimental to birds than heated Teflon:

I don't use non-stick cookware for much besides the occasional egg. But I thank my moon-and-stars pajamas that the FRE has built an exhaust fan in our kitchen which discharges all of my cooking bouquets to the outside.

Now if the movement to blacklist non-stick cookware was intended as a means to reduce demand for these products, thereby reducing their continued manufacture and concomitant destructive effects to humans and the environment, I'd be all for it. If that was the case, you'd want to boycott all the other products made with PFOA: Gore-Tex fabrics, machine lubricants, food packaging, printed circuit boards, and bullets to name a few. Since I fail to see those items mentioned in write-ups, I get the feeling this is based more on social trend than social responsibility.

2 Marian Burros recent NYTs columns:
In Search of a Pan That Lets Cooks Forget About Teflon
As Teflon Troubles Pile Up, DuPont Responds With Ads