It's based on the experiment of Alisa Smith and James MacKinnon, a couple who made a commitment to live for a year on food and drink originating from within 100 miles of their home in Vancouver, British Columbia.

I've read about eating locally and generally support it. But something about the eat-local movement has been nagging at me.

As an educational tool, I think the 100-mile diet is useful. But when I apply the concept of eating locally to those around me, I find it discriminates against those with lower incomes, fewer transportation resources, a lack of time, know-how, and availability of a kitchen for cooking, the institutionalized, etc.

Also, not that I'm a default supporter of big business, but I think it can limit the growth, by limiting the market, of what begins as a small family business. A dairy farm with 20-head that sells its milk locally might not be able to offer its employees the wage structure and benefits (health, pension, etc.) of a dairy farm that, say, joins a cooperative (like Organic Valley) and increases its market reach.

I can't see my 75-year-old neighbor who lives alone, on a fixed income, who doesn't drive, and who copes with a number of health issues, existing on local tubers all winter. With the US population aging, she's not an exception. (By 2030, 20% of Americans are projected to be older than 65. That's over 70 million people.) I also wonder how many people would voluntarily limit the diets of their children to support this movement.

I believe in supporting local food producers. I also believe in supporting local businesses that aren't directly food related. But, as a means for change, I question the propriety of applying eat-local expectations to individuals. I prefer to see government action that protects small business, that creates incentives for local food diversity, that addresses small-business' ability to provide a living wage with benefits, that addresses fuel-dependency, etc. At least this top-down approach might, among other things, offer an eat-local choice to groups who are otherwise excluded from this type of movement. Maybe I'm in a minority, but I believe voting can be a powerful tool for social change.

~~~~~~
Below is a photograph with caption by Kathleen Laraia McLaughlin, from her series "Color of Hay: Maramures, Romania". Her photos depict one face of 21st century sustainable-agriculture living. You can explore more of her award-winning photos here. 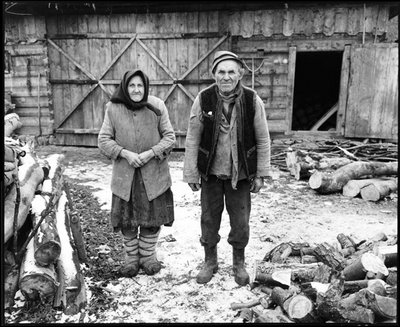 Palăguţa and Vasile Borodi, Budeşti, România, 2000
Romanians from the cities sometimes complain that in Maramureş the people have everything.
"They just go to the woods and get what they need."
Posted by Bix at 9:13 AM