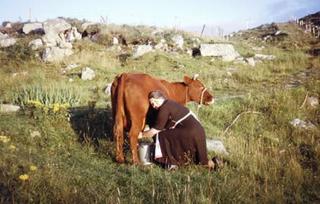 I'm not averse to companies making an effort to produce a cleaner product. Why should I be? If Horizon wants to abstain from pumping their dairy cows with hormones and antibiotics, more power to them. I'll even go along with them blasting that fact to sell more product.

It's a crime when a company reaps profit from bastardization of the term. I see it as a problem of enforcement, which in turn is a problem of big business lobbying.

From the Salon.com article:

... the USDA has been lax in enforcing current organic standards, which remain vague, and in creating strict new ones. ... Given the USDA's failures, confinement dairies like Horizon continue to profit at the expense of the nation's small, independent dairies -- ones that do follow organic principles and produce the healthiest milk possible for people, cows and the environment.

One solution, raised by my colleague, is for an independent institution to establish strict standards for "organic" and have purveyors of true organic product pay a nominal fee for their seal. It's disappointing we can't rely on government and our taxes to provide this assurance.